Prisoner Hunger Strike Solidarity (PHSS) is a coalition based in the Bay Area made up of grassroots organizations & community members committed to amplifying the voices of and supporting the prisoners at Pelican Bay & other CA prisons while on hunger strike.

People of Color Organize - People Of Color Organize! is a website journal and media source produced  by organizers supporting critical thinking, strategic work and direct action for social, racial, and economic justice. The website features debates, events, and trends within and emanating from the revolutionary left on matters of race, national oppression and self determination efforts. While unapologetically left in orientation, People Of Color Organize! is non-sectarian and offers a diversity of viewpoints from many movements.

Racialicious - the intersection of race and pop culture

Hip Hop Occupies - Hip Hop Occupies currently operates as both an Occupy Seattle working group, and as an autonomous body with a local to global framework. Because Phase I of our Goals and Action Plan includes growing our network beyond Seattle, part of Phase II will include creating a forum and process to expand democratic decision-making to comrades outside our region. As we grow, we recognize that the need for communication between occupations throughout the country is essential to success, and Hip Hop Occupies seeks to be model for this type of collaboration, rooted in arts, culture, and authentic community

Critical Resistance - Critical Resistance seeks to build an international movement to end the Prison Industrial Complex by challenging the belief that caging and controlling people makes us safe. We believe that basic necessities such as food, shelter, and freedom are what really make our communities secure. As such, our work is part of global struggles against inequality and powerlessness. The success of the movement requires that it reflect communities most affected by the PIC. Because we seek to abolish the PIC, we cannot support any work that extends its life or scope.

Incite - Women of Color Against Violence.

Committee to Connect the Dots - CCD seeks the end of white supremacy. As anti-capitalists, our work is focused on dismantling the prison industrial complex as a strategic site towards this aim. We also highlight the intersections between the prison industrial complex and other struggles for self-determination.  We function within a feminist and queer liberation praxis.

Decolonize Oakland - Decolonize Oakland (formerly the QPOC/POC caucus/committee of Occupy Oakland) would like to reintroduce ourselves to you, our communities, as an autonomous collective. We believe that working autonomously will give us the freedom to build power from below.

Portland Liberation Organizing Council - The Portland Liberation Organizing Council is in its beginning. PLOC is developing as -an organizing network to foster connections amongst groups engaged across the radical-political spectrum to build and nourish relationships, share skills and resources, and facilitate strategic coordination. We will work to create and exercise this council framework through embarking on an initial project together, a space liberation on May 1st. This specific project would provide an initial alignment of energy and focus for involved groups, provide for a space that could anchor this evolving work, and exercise politics through action. 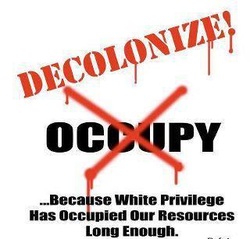